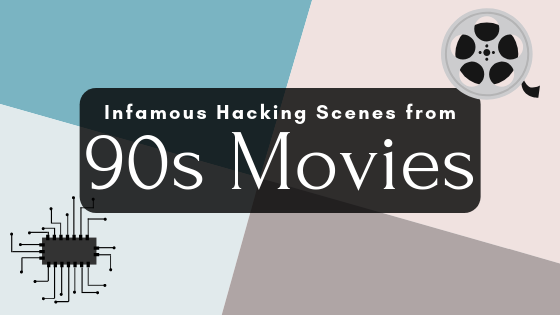 There are so many truly terrible hacking scenes in TV and movies it’s impossible to rank them. Whether it’s two people using one keyboard or 3D graphics to represent code, the inaccuracies are everywhere. Hollywood hacking has been the topic of many explainer videos and articles. Determining which scenes are accurate and making fun of the ones that aren’t is a good reason to learn more about basic hacking. For anyone who wants in on the joke, here are several of our favorite hacking scenes from ‘90s movies:

In the 1992 film Sneakers, Robert Redford plays Martin Brice, a fugitive hacker undercover as a security specialist. The word “sneaker” refers to a security hacker or someone who explores a system or machine for vulnerabilities to exploit. While trying to avoid detection during an important phone call, Martin and his team try to make it untraceable. They bounce the call off of nine relay stations around the world and two satellites.

This is a demonstration of phone hacking or “phreaking” where a phone is used to dial into a computer network. In this scene, the hackers are connecting from phone to phone to phone to prevent their call from being traced. Phreaking isn’t as relevant today because no one uses dial-up or phone-connections anymore.

In an iconic scene from the original Jurassic Park movie, Dr. Alan Grant (Sam Neill) and Dr. Ellie Sattler (Laura Dern) are busy trying to hold a door closed to keep a clever velociraptor at bay. They can’t lock the door manually because it’s connected to the park’s network. (The network was shut down earlier in the movie by Dennis Nedry played by Wayne Knight.) Lex, a teenage hacker played by Ariana Richards, comes to their rescue by sitting at the computer and declaring that it’s a system she’s familiar with. With her useless brother Tim (Joseph Mazzello) hopping behind her, Lex locates the correct file in a 3D interface and turns on the door locks.

Most of the time, 3D graphics used to represent files or code in movies is completely inaccurate. Hacking is actually just a few lines of code in a terminal window. Movies tend to use fancy graphics and unrealistic interfaces to spice up what would be a pretty boring scene in reality. But in this case, there was an actual filesystem that looked like the Jurassic Park Unix system called FSN. It may have been quicker for Lex to issue commands through a terminal. She instead navigates slowly through the 3D graphics to activate the door locking systems.

Hackers is a 1995 cyber crime thriller starring Angelina Jolie as Kate and Jonny Lee Miller as Dade. In one of the early scenes of Hackers, the main characters are struggling to watch the TV shows they want (essentially a non-existent problem today because of streaming). Dade aka “Crash Override” hacks into a local TV station. He simply calls the security guard and requests the phone number for the station’s modem. Once he has the information he needs, he’s able to hack the system and control a robotic arm. He uses the arm to switch out the programming to an episode of Outer Limits. This is pretty accurate for hacking in the 90s so far except maybe the robotic arm. Is it realistic for a TV station to have a robotic arm?

Then, Dade gets a message (somehow) that there’s already a hacker with access to the TV station and she doesn’t want to watch Outer Limits. Dade and the other hacker, Kate aka “Acid Burn,” then start competing for control of the station. This involves a dramatic and unrealistic fencing match between robotic arms holding different tapes. Other than the robot fight and how they’re communicating with each other, it’s not unrealistic for hackers to compete for control of a machine. If one hacker exploits vulnerabilities to get access, they might fortify those weaknesses to prevent other hackers from getting in as well. They’ll also usually leave a backdoor so they can get in and out without the administrators noticing.

The hackers messaging each other back and forth isn’t accurate in this case, because it would mean that they accessed each other’s systems through the TV station. At the time, the modem wouldn’t be able to connect with both Dade and Kate at the same time. And if it were able to, it’d mean that Kate had control of Dade’s entire hard drive and could see his real identity and location.

In The Net, Sandra Bullock stars as Angela Bennett, a systems analyst who works remotely for a company called Cathedral Software. In one scene, Bennet is on the phone with a customer whose system has been compromised by a virus. She disassembles the virus to understand what it’s doing. This means she converts the binary executable code of the virus to machine code. Machine code is the type of code your computer or CPU can execute. Then, she turns the machine code into a version she can read. This allows her to understand what vulnerability the virus is exploiting.

Other than the on-screen interface she uses, this is an accurate strategy for disassembling a virus. Once she determines what the virus is doing, she can figure what data has already been compromised and how to fix the weakness to prevent future attacks. Again, though, the interface she uses in the movie isn’t exactly realistic. Hollywood just jazzed it up to make the scene more engaging for viewers.

When aliens attack in the 1996 movie Independence Day, the heroes conceive a ridiculous plot to infect the alien’s mothership with a computer virus. And, for some reason, it works. Captain Steven Hiller (Will Smith) pilots a salvaged alien ship so that David Levinson (Jeff Goldblum) can upload a virus when they sneak aboard alien headquarters. The aliens can telepathically take over human minds and conduct psychic warfare, but for some reason human computer technology is compatible with theirs. It doesn’t make sense, but the virus disables the main ship’s defenses and the aliens are defeated.

In the cult classic Office Space, a programmer and his coworkers at a tech company are frustrated by their jobs. They devise a plan to steal from the company using a computer virus. The disgruntled employees are surprised at how easy it is to infect their employer’s accounting system with a virus. Peter (Ron Livingston), Samir (Ajay Naidu), and Michael (David Herman) simply insert a floppy disc containing the malicious code into a machine and that’s it. The code functions to skim imperceptible amounts of money from the company and move it to a special bank account. Essentially, they’re stealing from their employer one half cent at a time.

The comedic slow-motion sequence showing how easy it is to upload a virus manually if you access to the machine is pretty accurate. Most people wouldn’t even consider this hacking, because there were no firewalls, passwords, or other obstacles to overcome.

While hacking scenes from 90s movies aren’t the most accurate, they’re still entertaining. Understanding the inaccuracies of hollywood hacking scenes may not save you from an alien invasion, but it could help you protect yourself from hackers.

The Do’s and Don’ts of WordPress Security

Back that Site Up: A Backup Guide through the ACC

Lock It Down: How to Keep Your Site Secure