pair: The Power Behind The Fred Rogers Company

Fred Rogers dedicated his life to educating children, addressing social issues, and providing a reliable presence on television. Today, pair Networks is proud to power The Fred Rogers Company, a non-profit production studio that is expanding the potential of educational programming.

In the days of Mister Rogers’ Neighborhood, a television series — complete with live action storytelling and puppets — was enough to satisfy viewers. But almost fifteen years after the show signed off, children and parents are demanding more diverse content than ever. They want media to accompany their favorite shows and on-demand mobile options.

“The mission of a television production company has changed since 1970,” said Jack Rowley, New Media Developer at The Fred Rogers Company. “They want games, they want apps, a parent site, a teacher site. We have something like 40 million streams for an average Daniel video.”

As the hosting partner of The Fred Rogers Company, pair Networks answers this unique demand. Our servers maintain and distribute educational content on a daily basis around the world. The Fred Rogers Company produces three television series, including “Daniel Tiger’s Neighborhood,” which Rowley mentioned — and each has its own online presence. It’s a lot of pressure. The leading producer of children’s programming for PBS cannot afford to go offline or lose connectivity. But it’s challenges like these that keep pair on the leading edge. It’s this increasing need for innovative web solutions that forces pair to move forward in its offerings each year. After all, the demand for media shows no signs of slowing down.

“I asked around and said, ‘What’s the best server?’ It kept coming back to pair,” Rowley said.

Fred Rogers was an innovative mind. He used television to reach into homes across the country and help children overcome life’s challenges. At pair we have a similar mission, but we work on a different, more contemporary platform. We aim to help customers use the Internet to expand their reach, realize their purpose, and make a difference through the sharing of great ideas. Today, we count ourselves among the masses Fred Rogers inspired. We believe ideas can change the world. That’s why we’re so proud to power The Fred Rogers Company, a group of people upholding a very esteemed legacy.

Why pair? Because we have the experience, the bandwidth, and the hardware to help you meet your goals. If you want to reach for the skies, learn more about how pair can benefit your business or give us a call at 1-877-724-7638. 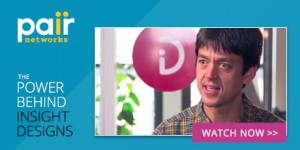